A Month of Anniversaries

I managed to finally upload my wedding photos to Facebook. As I was going through them I felt happy and sad. Happy because it was a beautiful day and everything went pretty perfectly. Sad because although we wanted it to be a small wedding, in hindsight there are some family and friends that I wish we could/would have invited. It was such a special day, and I wish they had been there with us. But it is what it is, nothing we can do about it now.

I also got “sad” looking at how “thin” I was compared to now. It’s funny – the first few times I looked at those pictures, all I could think was “damn, why didn’t I lose more weight before the wedding?!” But now, now that I’m about 25 pounds heavier, I’m like “shit, I looked pretty good back then!” Lol I guess it’s all about perception. I also wish I’d gotten my hair professionally done. Oh well!

Dave and I on a random drunken night five years ago:

Dave and I on our wedding day (my three favorite pics…couldn’t decide which to pick so I’m posting all three!): 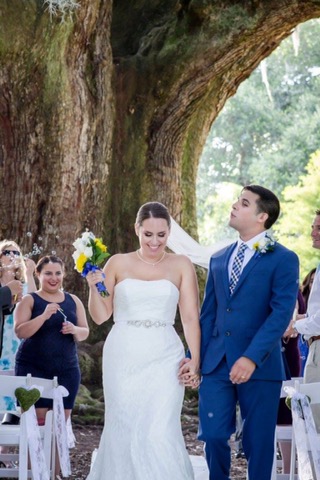 1 Response to A Month of Anniversaries