Deciding what food to bring on the plane

One night a few weeks ago, while I was looking up hotels in Berlin, I thought it would be a great idea if I made a few sandwiches for my flight to Paris. After all, it was going to be a long traveling day (over 13 hours because of a layover in Canada), and I didn’t want to find myself starving and forced to waste money on a crappy $10 sandwich from some place at the airport food court. I had to do a bit of research, to see which foods I could bring from NY to Canada and then from Canada to France. When I saw that I could bring fish into Canada but not meat, I decided that I would make myself a lox sandwich. A bagel and lox with lettuce, tomatoes, and onions is one of my favorite meals in the world!

The night before my flight I went to the supermarket and bought: a package of lox, a loaf of whole wheat bread, a cucumber, and a tomato. I also bought a thing of hummus and a bag of caramel-flavored Popcorners chips, which have been my new favorite snack ever since my trip to Seattle a few weeks ago. Total cost? $22. So much for saving money. But I had enough food for at least four sandwiches, so it was worth it.

Before I left for the airport I cut everything up and put it all into separate little ziploc bags. I didn’t want to make the sandwiches ahead of time because 1) they would be soggy by the time I ate them, and 2) I wasn’t sure whether everything would be allowed into Canada, and I didn’t want to be forced to throw out my sandwich just because I had put some cream cheese on it. 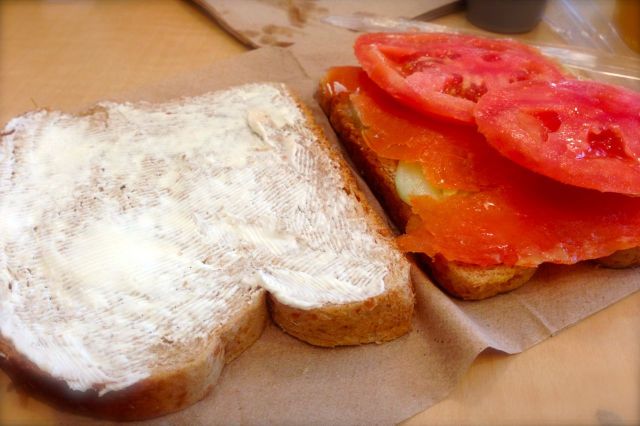 I was starving by the time I got to the airport. Di and I went into Au Bon Pain, and while she got a coffee I made a sandwich. I might have looked a bit silly, sitting in the airport making myself a sandwich, but I am so glad I did it, because it was delish! Oh yeah, I also packed the rest of the pumpkin brownies I made the other night. Di tried them and she loved them. 🙂 When we landed in Montreal we were hungry again (what is it about traveling that makes you completely famished?), so I made another sandwich and we had “snack time” – sandwich, brownies, hummus on bread, and some more popcorn chips. I made my last sandwich and finished off the last of the brownies right before we landed in Paris. 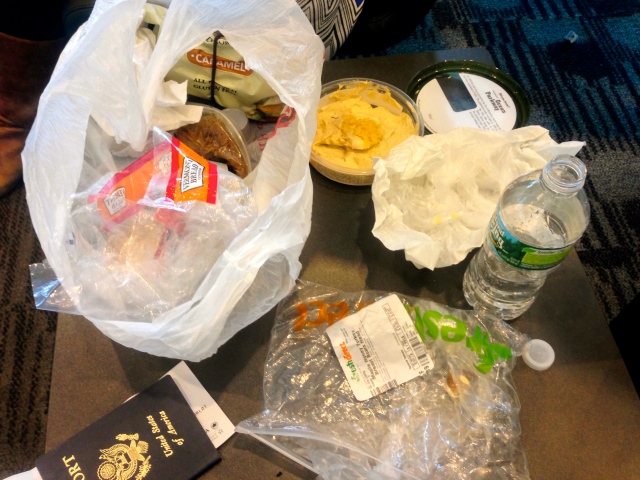 Turns out that I didn’t have to worry about anything after all. Customs never even asked about my food, neither in Canada nor in France. I left the French airport with some hummus, a few slices of whole wheat, and some Popcorners crumbs. Which I snacked on as I was writing this.

2 Responses to Deciding what food to bring on the plane