At the end of last year I was 15 pounds heavier than I am now. I wasn’t fat (according to my friends, anyway), but I was definitely overweight, and I didn’t like it. (Of course, it didn’t help that two of my best friends are both a size zero. I’d see pictures of the three of us and want to throw up.)

I started doing yoga, and then I joined a gym. But even though I was exercising somewhat regularly I still didn’t lose any weight, because I just couldn’t stick to a healthy diet. I’d be good for a few days, but then Friday would roll around and I’d go out drinking with friends, and we’d get some nachos or mozzarella sticks while we were drinking, and then at 3 am we’d get a slice of pizza, and then the next day I’d wake up with a hangover that could only be cured by a bagel. And then we’d do it again on Saturday night. Needless to say, this unhealthy lifestyle is NOT conducive to losing weight.

Then one day last November I was checking my email and I saw that Lifebooker was having a deal on HCG weight loss drops. I am a sucker for a good Groupon, Lifebooker, or LivingSocial deal, so when I saw that I could get a 40-day supply of HCG weight loss drops – normally $104 dollars – for ONLY $39 I just had to have it. Nevermind that up until that morning I had never even heard of HCG – suddenly I was all about it. All you do is take the drops before each meal? A cheap and easy way to lose weight? Sign me up!

Of course, once I started reading up on it, I found that the HCG diet is be anything but easy. Along with taking the drops, you have to reduce the amount of food you eat to only 550 calories per day! And your food choices are very very limited. But I was determined to finally lose the weight that had been bothering me for such a long time, so I decided that I would start the drops in the beginning of 2012.

And I did. I spent the first 5 months of 2012 on a very strict diet. It was hard work that required willpower, determination, and having absolutely no social life. But by the time I finished with my diet in May, I was down 25 pounds. 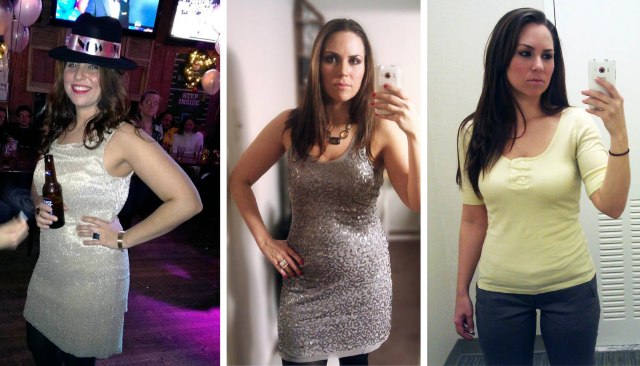 My before, during and after pics. When I look at that before pic I want to puke.

But then the warm weather came. This summer I was all about YOLO – You Only Live Once. It’s a good attitude to have in general – but not when it comes to dieting! I know crepes topped with Nutella, ice cream and walnuts are bad for me, but YOLO! It’s like as soon as I said YOLO I was allowed to do anything I wanted. I also felt like it was okay for me to indulge a little, considering how much I had sacrificed in the earlier part of the year.

But apparently I am incapable of indulging “just a little.” Over the past five months I’ve watched as the scale has crept up, and up, and then down a little, and then back up again. Since May I’ve gained back 10 pounds. I’m only like 2 or 3 pounds heavier than I was in that “during” picture above, but while back then I was on a downward track and was happy to look in the mirror, now when I look at myself naked all I see is my failure to keep the weight off.

I had already decided to go back on a strict diet. Then last week I got an email for half off of the HCG drops, and it just struck me as the right time to start again. So I ordered them, and they came in the mail, and today I start the “very low calorie” portion of the diet. Mentally I find myself in the same headspace that I was in back in January  – now is the time to do it. No cheating, just buckle down and get it done, so that when 2013 rolls around I will be starting the year as the person I want to be.

So yeah, expect a lot of diet recipes and posts over the next few weeks!