The best invention ever – the Bra Strap Extender

Today is the big day – my company’s holiday party! Here is the dress that I’m wearing (with black tights, knee-high boots, and a blazer for the early part of the evening):

I got this dress at Zara back in September. It was on sale, so I bought it without trying it on. As a result, I didn’t realize that I would have bra issues until I tried it on at home. It fit like a glove, but of course my bra was clearly visible. When I tried it on without a bra, well, let’s just say that going braless is NOT an option for a busty woman like me.

So I put the dress in my closet and forgot about it until last month, when I started thinking about what I could wear to the party. I remembered the Zara dress and decided that I would figure out a way to wear it. After all, I know I’ve seen big-chested women wearing backless dresses before. There must be something I could do.

To the internet! After doing some extensive research (watching a YouTube video called Best Bras for Every Top! 12 Ways to wear a bra!), I came across the answer I was looking for at 6 minutes in: I needed to buy a bra strap extender!

I went straight to amazon, and after reading all of the reviews on every single bra strap extender they sell, I ended up buying THIS ONE, because it’s extra long: 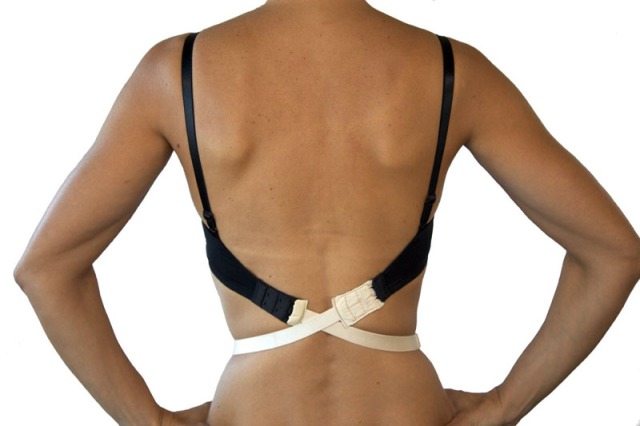 It took a bit of futzing around before I got it to work properly. Some advice: it works best with a bra that has that rubbery no-slip material (update: it’s called SILICON!) along the inside, like many strapless bras do. I tried on my dress, did a few spins in front of the mirror and was SO EXCITED by what I saw: me, in an open-backed dress, with perky boobs!!

It’s a damn shame that I’ve had boobs for over 20 years but had never heard about this contraption until now. Oh well, better late than never!

(Update – click here to read what actually happened when I wore the bra strap extender.)

2 Responses to The best invention ever – the Bra Strap Extender