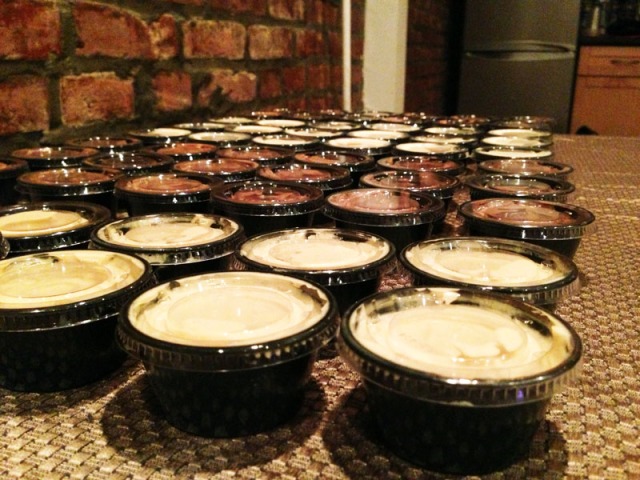 When my friend Tiffany told me that she was going to have a party at her house to celebrate her birthday and her new apartment, I got ridiculously excited. “I’ll make something!!!” I immediately went to pinterest to look for a cute little dessert to make that would have everybody oohing and ahhing.

It only took about 5 minutes of searching for me to figure out what I was bringing: PUDDING SHOTS! I’d never heard of them before, but the cute little photos on pinterest had me hooked.

I made these shots as fattening as possible, meaning I used regular pudding, heavy cream, and extra creamy cool whip. Everything I read said that if you tried to go “Light” or “Fat free” then you wouldn’t end up with a normal pudding texture because of the alcohol.

But now that I’ve made them, I’m calling bullshit on that. I made one batch of shots with sugar-free chocolate pudding, and they came out fine. I’m pretty certain that regular milk (or maybe low fat half and half) and sugar-free cool whip would have worked out just fine too. I will be making these again soon, so I’ll let you know what happens.

But if you’re worried that they won’t come out good, then go full fat. Trust me, you won’t be disappointed. Everyone who tried one LOVED THEM. And they were a good conversation starter, because while everyone has heard of Jello shots, no one at the party had ever heard of a pudding shot before.

In a few days I will post the individual recipes I made. I don’t know that they warrant their own posts, but I took sooooo many pictures and I really want to share them all!

3. Portion into plastic shot glasses, then stick in the freezer until you’re ready to serve. (They won’t fully freeze because of the alcohol.)

That’s all! Just try not to get too buzzed when you’re licking the beaters and bowls, as I did.

2 Responses to Pudding shots – the best party food ever!