Surprised?? I sure was! I did NOT expect to get pregnant so soon after the wedding. I didn’t even want to start trying until September, because delivering in June would be much more convenient work-wise. Dave and I stopped “being careful” once we got engaged, so I guess the possibility was always there, but I just was not expecting it to happen so quickly. I sure as hell didn’t think it would happen the night before the wedding!

About a week after the wedding, I started feeling…not right. I wouldn’t call it nauseous, but something was up with my stomach, because all of the sudden I had NO desire to have a cigarette. I had been smoking 7-10 cigarettes a day; now, I would light one up, take a few puffs, and throw it away. I chalked it up to the fact that my period was right around the corner – even though that had never happened before. (Yes, the thought “Rory, you might be pregnant” did pass through my mind, but I dismissed it as absurd.)

The following week I was feeling normal again, although, notably, my period didn’t come when it was supposed to. I resumed smoking (not as many though) and I went out one or two nights and had a few drinks. By the end of the week, my period was 8 days late, and I decided it was time to take a home pregnancy test.

The first test didn’t work – probably because I peed all over the stick while trying to get it under my “urine stream.” Whoops! Even though it came up “pregnant,” there’s supposed to be a solid line in that little window, and even though I could kinda, sorta, maybe see a faint blue line if I squinted, it definitely wasn’t conclusive enough for me (although I did immediately stop smoking). 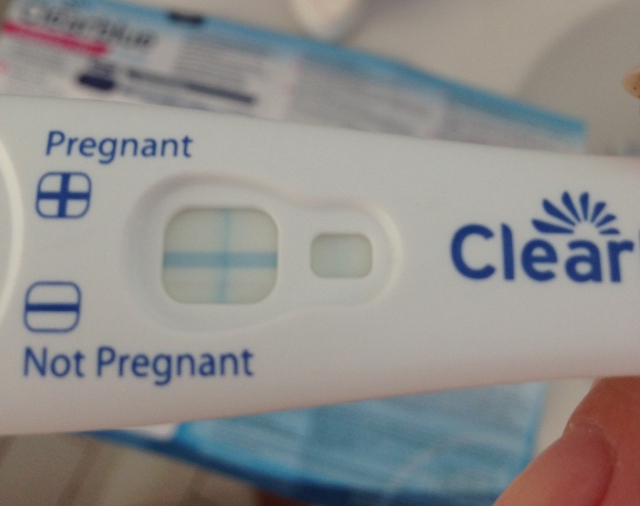 Two days later I took a second test, and this time I peed in a cup and then dipped the stick in the pee. It came up positive within 30 seconds. 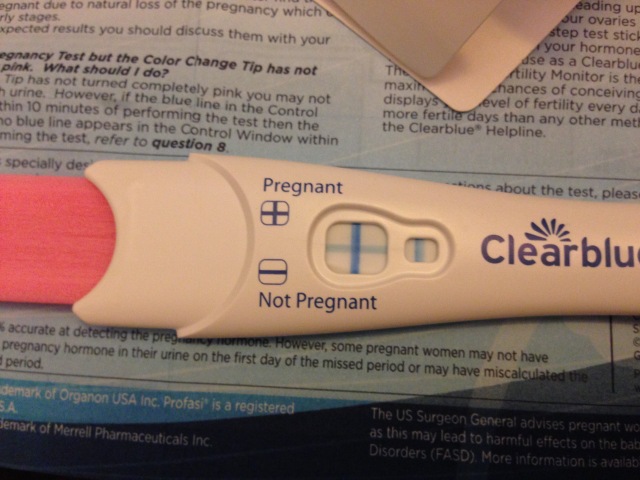 Even though it said positive, I still didn’t believe it. Since I’m older, I really thought it would be harder for me to get pregnant. When I had been baby planning, I would say things like “We’ll start trying in September and hopefully I’ll be pregnant by January.” So to get pregnant without even thinking about it? I just didn’t think it would happen.

Even though I really wanted to believe I was pregnant, I wouldn’t allow myself to get excited. Despite all the proof (the home pregnancy tests, daily nausea, tender boobs, and a complete lack of desire for a cigarette), I was very careful with how I worded things. “IF I am pregnant,” “IF this isn’t early menopause,” were things I said quite a bit. “I’m just nauseous in the morning…that doesn’t mean it’s morning sickness!” I just didn’t want to get my hopes up and then be disappointed. I wouldn’t officially believe it until I went to the doctor.

Making my first doctor’s appointment turned out to be quite the hassle. First I had to wait to be put on Dave’s insurance. We put in the paperwork about a week after we got married, and it took about two weeks to be processed, which was just around the time I took my second home pregnancy test. I was so excited to finally have insurance!

But lo and behold, they f*cked up my name, spelling it Rori instead of Rory. So Dave had to go back to his plan administrator and submit a change form, and it ended up taking another week. In the meantime I took a third home pregnancy test – this time the fancy digital kind that tells you how far along you are (although I had already figured out that IF I was pregnant, it had happened the night before the wedding). 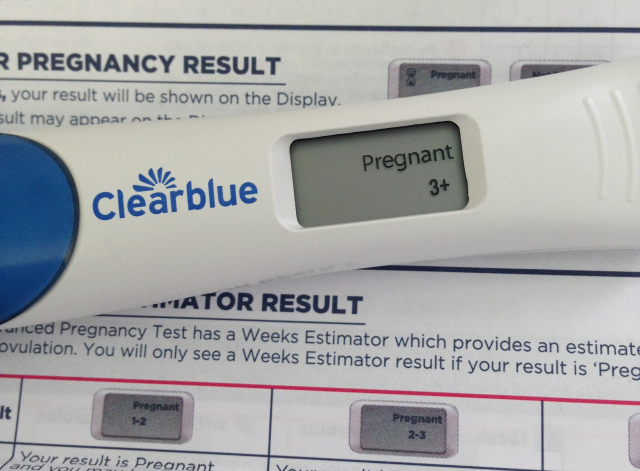 Eventually, FINALLY, I was able to make an appointment, and fortunately they had a cancellation and were able to see me the next day! That was August 6. They confirmed I was pregnant and gave me a due date of March 16. They also scheduled me for a sonogram the following week, which I will write about next.

So there you have it! I’ve been writing this post since the beginning of August and have been waiting over three weeks to post it! First I had to tell close friends and family, and then I had to wait to get out of my first trimester. Which I finally did, today! 🙂

This entry was posted in Blog, Life, Marriage, Personal, Pregnancy, Pregnant, Uncategorized, Wedding and tagged I'm having a baby!. Bookmark the permalink.