Week 32: Pregnancy Diet Starts Now! (No, this is not a joke) 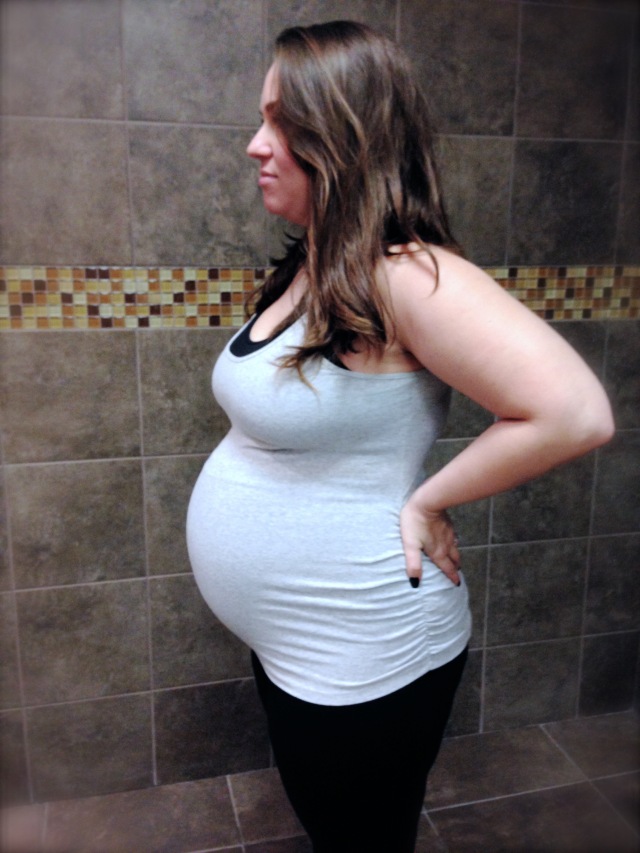 I’m 32 weeks pregnant and have decided that now is the time for me to go on a diet. Why? The answer is simple…I’ve gained too much weight.

At the beginning of my pregnancy I adopted the attitude of: “This is the only time in my life where it will be acceptable for me to gain weight. So I’m going to eat what I want and not worry about the scale…after all, there’s not much difference between having to lose 25 pounds vs. 35 pounds after I have the baby.”

And now that I’ve gained 50 pounds and still have almost 8 weeks to go? I seriously regret that decision.

Truth be told, it’s not the number on the scale that bothers me. I mean, yes, when I weigh in at the doctor’s office and see the number, I want to throw up a little. I can’t believe how much I weigh! It’s crazy! (No, I’m not telling –  I won’t even tell David, although I’m sure he has some idea.) Sometimes I look in the mirror and I’m like, “Holy shit! I’m so big!” But I realize this is just temporary, and I’m not TOO worried about losing the weight after the baby is born. I’m giving myself 6-9 months. Besides, I’m having a baby!! I’m too happy and excited to let me appearance get me down (most days).

So what does bother me about the weight gain? Well, it’s my back…and my knees…and my hips, legs and pelvis. Basically everything below the waist. My sciatica has resurfaced after 15 years and has been kicking my ass on and off this whole pregnancy, especially in the past two months as my weight has skyrocketed. (If you’re lucky enough not to know, sciatica is this shooting pain that – for me – goes from the center of my buttcheek down my leg. It is f*cking debilitating.)

With nearly 8 weeks left of pregnancy, I could still gain another 20 pounds! In fact, this is the time when I’m supposed to gain the most weight! I simply cannot imagine how my body will feel with an additional 10-20 pounds.

So I asked my doctor about it, and he says that while I shouldn’t “diet” and try to actually lose weight, it’s fine for me to eat healthy and stay active and not gain any more weight during the rest of the pregnancy. I’m already at the high end of the pregnancy weight-gain spectrum, so as long as I eat healthy and the baby grows, everything will be fine even if my weight stays the same. But he also said that I should be prepared to gain more weight, and that he’s not worried about it, the pregnancy is going well.

So that’s where I’m at now. Since the New Year started I’ve tried to cut down on the unhealthy food that I have been stuffing my face with these past months – pasta, rice, chocolate, candy, bread, and soda. Soda! Until this pregnancy, I hadn’t drank soda for the past 10 years! On a positive note, during my pregnancy I did learn how to make the most AMAZING Alfredo sauce.

Exercise-wise, I’ve actually been going to the gym throughout the whole pregnancy…on the days when I have enough energy to go, that is. Sometimes I’ll be on the treadmill and I literally can’t walk faster than 2 mph, but I figure as long as I’m doing something, it’s good enough for now.

Like most people, I slacked off quite a bit during the holiday season, so after the New Year I picked it back up “hardcore.” At one point I made it to the gym five days in a row. On the fifth day I decided to do legs…and proceeded to pull a muscle in my groin/pelvis. I woke up the next morning like WTF?! I could barely move my right leg or lift it off the floor without feeling this intense pain where my leg meets my…vagina.

And now, two weeks later, it’s still nearly as bad as it was then. In the morning it’s painful but I can move. But sometimes, by the end of the day, it’s literally like I am dragging around a dead limb. Rolling over in bed was already a hassle, but now it actually hurts. It seemed to be getting better at one point, so on Thursday I went back to the gym, and BOOM, now it hurts all over again. And I didn’t even do anything! Just stretched and walked between 2 and 2.5 mph for a half hour.

So now I don’t know what to do as far as the gym goes! I want to stay active but this pain is ridiculous. Maybe I need to rest it a few more days? In any case, right now it’s more important than ever for me to watch what I’m eating.

Fortunately this will all be over shortly. 🙂

4 Responses to Week 32: Pregnancy Diet Starts Now! (No, this is not a joke)