This year’s Valentine’s Day/birthday experience ended up being pretty awesome. Valentine’s Day was nice and chill. I got Dave a card and a piece of Whole Foods carrot cake (his favorite), and I left it on the kitchen table so he saw it when he came home from work in the morning. When he got home, he read my card and then brought me his card and two boxes of Raisinettes (my current favorite) while I was in bed.

I got such a kick out of the fact that the cards we got each other are so similar! The hearts, the side ribbon thing, the “to my (spouse)” on the front – I mean, they’re practically the same card! Even funnier was the fact that we basically said the same thing on the inside too – love you, can’t wait for baby to come, looking forward to growing old together. Yeah, I guess it’s a generic sentiment that most newlyweds who are expecting a baby would say, but still, the similarities made me smile. 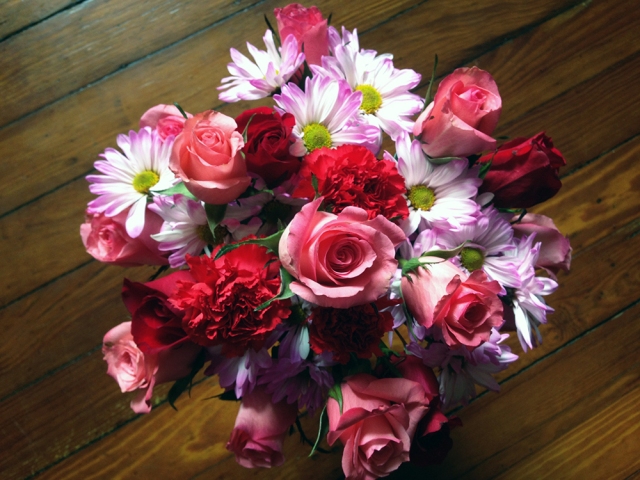 When I got out of bed I saw the flowers on the kitchen table. Not a surprise, because Dave is always good about getting me flowers, but these were particularly pretty. He usually cuts them and puts them in a vase for me, but this year I decided to watch a two-minute Youtube video and arrange them myself. I think I did a pretty good job! I really want to take a flower arranging class…one day.

The rest of the day was nice. We went to breakfast, then I worked a bit. His parents came by in the afternoon to pick up his son so that we could go to dinner just the two of us. But that didn’t end up happening, because by the time 5 pm rolled around, my body was so tired and sore that I didn’t want to move. (These days I’m sore from doing nothing but sitting in a chair. It’s ridiculous!) So we just ordered a buttload of sushi and ate at the house. It was perfect.

On Monday I still had a lot of work to do, so I woke up early. While I was working, Dave came into the office to ask what I wanted for breakfast, and if I wanted to open my present. He ended up making the most delicious omelet EVER! While he was cooking it, I opened my gift. And was shocked!

At first I was like “Ooh, a Coach bag, awesome!” Then I noticed the pink wallet, and the pink and blue baby theme. THEN he said the blue bag was actually for me to use as a DIAPER bag. And then I turned to mush lol. I was really surprised by the thoughtfulness of this gift.

The rest of my birthday was nice. We went out with friends to dinner at Primitivo and shared a 26 oz. rib eye (omgggg so delicious – there’s nothing better than a perfectly cooked steak!), and then to Sucre for dessert (I bought macaroons in every flavor so I could finally decide which was my favorite. The verdict? It was a tie between the raspberry white chocolate and the bananas foster.) Then we went to a bar for a few drinks (or soda in my case) before calling it a night. All in all it was a very enjoyable day.

I hope this post doesn’t come across as being braggy. The truth is, in the past,Valentine’s Day and my birthday have usually been treated as nothing special. Since my birthday is the day after Valentine’s Day, the two have a tendency to be merged into one: one dinner, one gift, one card, etc. (Except for that one year when this guy I was dating pulled the slow fade a week or so beforehand so he wouldn’t have to get me anything…and then reappeared two weeks later like nothing happened. Are you kidding me? Lol.)

To be clear, an amazing V Day/b-day experience has NOTHING to do with presents. I’m an adult, I work, and if I want something, I can buy it for myself. It’s about being made to feel special and loved, a little more so than usual. So when V Day and your b-day are back to back and you don’t get that “special” feeling, that’s TWO days of thinking “wtf?! Am I not worthy of a little extra love?”

So yeah, after many lackluster V Days and b-days and a particularly un-amazing 2015 birthday that I don’t want to get into right now, I went into this weekend with ZERO expectations (negative expectations, actually). And thus I was beyond surprised and happy at the thoughtfulness that Dave put into this year’s gift. He really hit it out of the park, to the point that I think I may just be able to let go of the “February disappointment” that has built up over the years.

And just one final, unrelated note – this post talks about what hapened during Week 35 of pregnancy – but as of today I am actually 36 weeks pregnant! Only four weeks left!