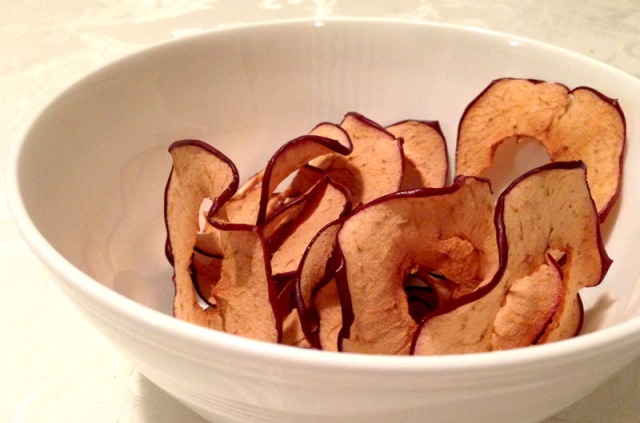 There is no better way for me to describe how good these apple chips came out then by relaying the conversation that took place between me and a coworker who knows that I am back on the HCG diet.

(Takes a chip from my ziploc baggie. Face lights up.)

Him: Wow these are really good!!

Him: But they must be really bad for your diet.

Him: You know, all the sugar.

Me: Yeah I made them last night!

Him: What?? I thought they were store-bought! They’re so good!!!

Last time I was on the drops I made these fairly frequently, but they never came out as good as they did the other day. It’s either because I used a Macintosh apple this time, or because I lined the cookie sheet with parchment paper, which I don’t think I did before (it’s been so long that I can’t actually remember!). Since I was making them so often back then I invested in two fairly inexpensive items that make the process go a lot easier: a mandolin slicer and an apple corer.

(P.S. I bought the cheapest mandolin slicer they had at Bed Bath and Beyond, which was only like $10, and I regret it. It doesn’t slice as smoothly as I’m sure a more expensive one would. So if you’re considering buying one, I recommend investing a little more than the bare minimum. :-))

1.Line a tray with parchment paper, and preheat the over to 215.

2. Core the apple. (Below, witness my apple coring FAIL, which led to a hole that was twice as big as it should have been!)

4. Line the tray with the sliced apples.

The timing isn’t an exact science. The slices are all different sizes, so they’re not going to be done at the same time. At the one-hour point I start checking to see if any are done. I’ll press down on the apple, and if it feels springy then I know it needs more time. It might take you a few tries to figure out how to get it to a crispy potato-chip texture in your oven, but there really isn’t any way to mess these up, unless you take them out too soon (in which case you could always pop them back in) or you forget about them and they burn. 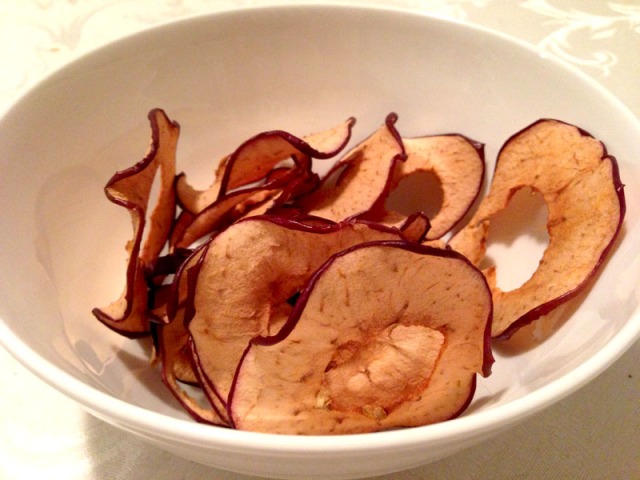